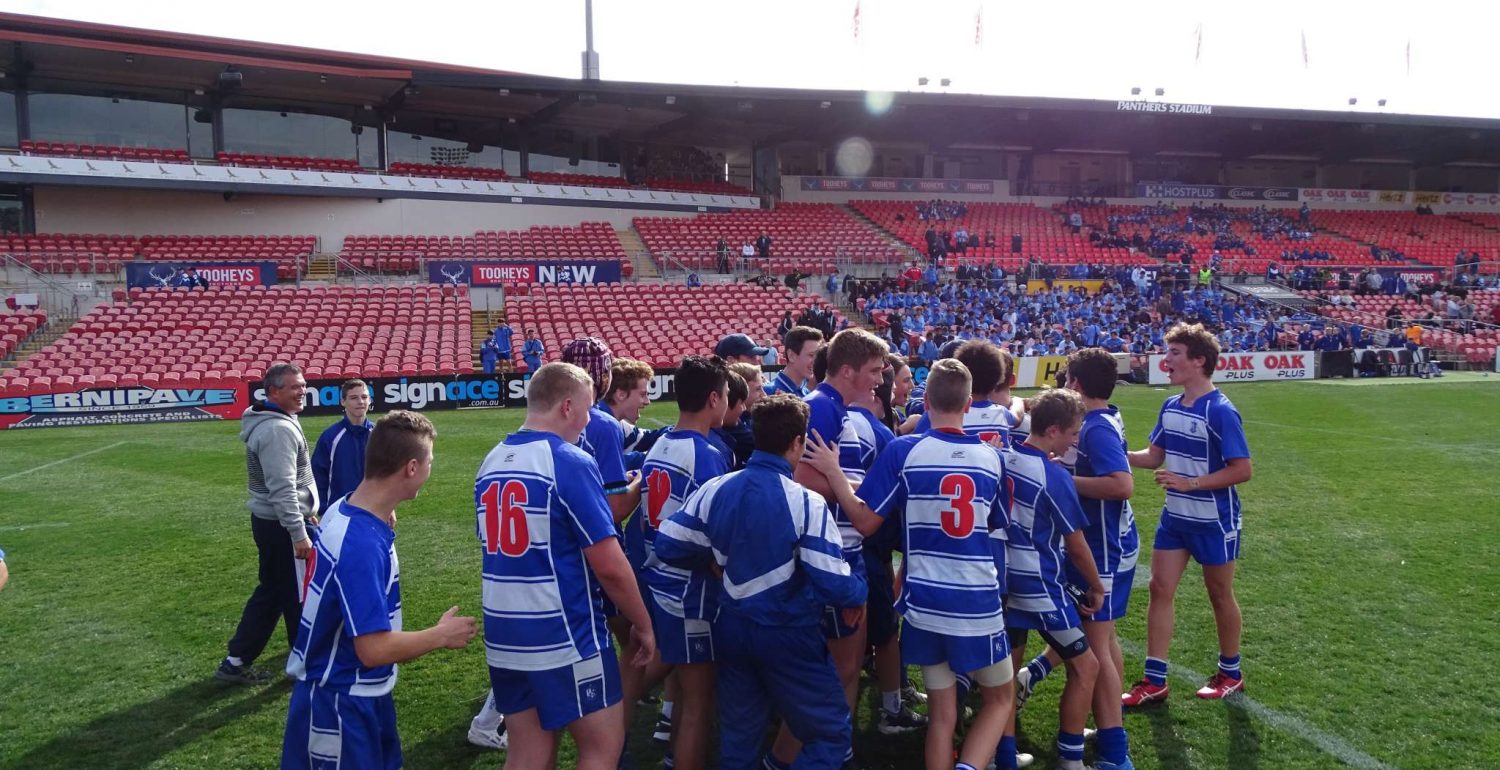 On Thursday, our 1st grade rugby team played in it’s second successive MCS Grand Final against Patrician Brothers College Blacktown. After losing 40-10 to Blacktown earlier in the year, the boys knew they would have to play their best footy to compete with Blacktown. The boys had a great start and led 6-0 after 15 minutes. A controversial sin binning then turned the game Blacktown’s way and they scored 4 unanswered tries in 15 minutes to take a 20-6 lead into half time. The game quickly changed in the second half as St. Dominic’s gained momentum. Two tries in the second half took the score to 20-18 and St. Dominic’s looked the better team. Unfortunately a few late chances were squandered and Blacktown held on to win 20-18. Congratulations to the first grade squad on a very successful last two seasons in the MCS making consecutive grand finals and winning over 90 percent of their games. Thanks to Karl Thornton our physio, Chris Hutchinson from the Mounties club, Jamie Soward from the St. Mary’s club and Mr. Rawding our Manager for their assistance in providing a professional Rugby League program for the boys.

In our grand final match for the U14s Trophy we came up against Parramatta Marist. We had a convincing win over them in the round matches so went into the match feeling confident. Parramatta came out strong, going in to score the first try of the match. This was enough to see us lift our game and dominate for the remainder of the match, coming away with a 50-6 win. After a stellar performance, man of the match went to Josh Lewin who walked away with the match ball. Congratulations to all the boys on a successful season.

We went through the competition rounds winning some and losing some, sometimes playing well and sometimes bad. We made it to the semis and played Blacktown Pats 3’s who we had beaten before, and ended up winning by 40 putting us into the grand finale for the U14’s plate. We were to come up against All Saints Liverpool who we hadn’t played before so we weren’t sure what to expect. On the day we had a pretty scrappy warm up and took that attitude onto the field playing a bad first half. We went to half time and got a pep talk from Mr Samoluk and went back on the field pumped and came back strong, putting on big hits and big runs and were behind by 6 with a minute to go. In our final play we managed to score, but unfortunately missed the kick and lost 16 – 18. I’d like to thank Ms Pritchett for managing, Mr Peake for coaching for a couple weeks, Mr Samoluk for coaching and putting up with our fighting and most importantly to the boys for turning up every week ready to play and to the parents for taking us to and from training and games.

With a win and a loss against St Greg’s earlier on during the year we had confidence that we could win. Before the game Mr Ahern told us that we shouldn’t be discouraged about the loss we had at St Greg’s, as we had to play on a mod field and play straight off the bus.

We went into the game knowing that if we all did our jobs and played as a team we could come away with the win. In the first half of the game Josh Debritt and Nick Hitchen scored tries for us as our defence stayed rock solid. We led 12-0 at half time. During the break,  Mr Ahern told us to complete our sets and keep doing our individual jobs.

In the second half we got out to a 20-0 lead thanks to tries from Jett Cleary and Jaxon Edgar but unfortunately, we let in 3 soft tries that got St. Gregs back in the contest at 20-14. With 2 minutes to go, Conor Autugauvia muscled his way over for a try and we won the game 26-14.

Congratulations to all staff who have taken their teams to this point of the season and to those who were victorious yesterday.

A particular thank you to all staff who assisted in supervising the supporters throughout the day.

Special thank you to Ben Cummins for leading the chants of our junior students.