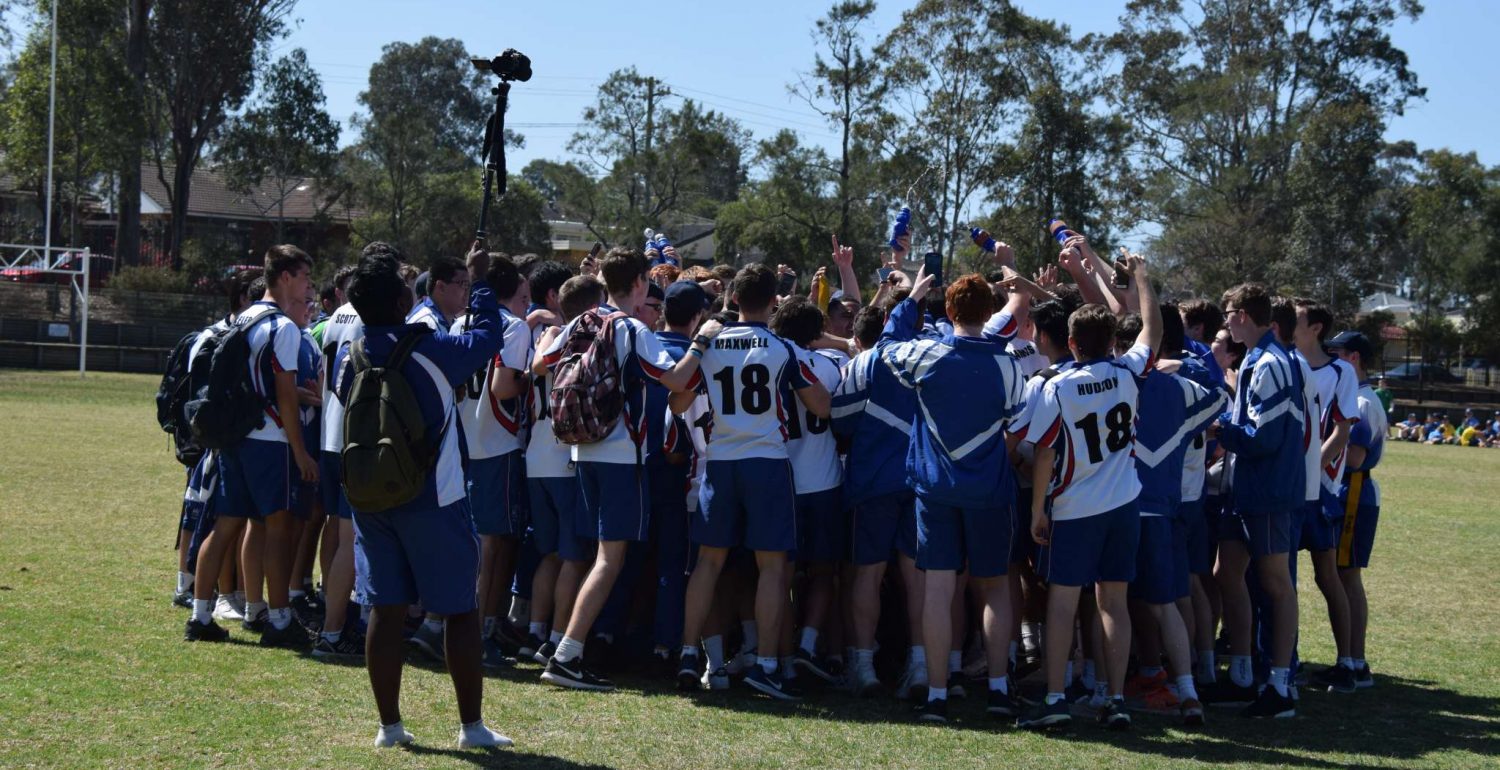 Term 3 has been a successful period for sport here at the College. Firstly, congratulations to all of our students for your continued efforts in representing the College in a variety of different sports this Term. In attending Touch Football, AFL and Athletics’ Carnivals throughout this period, it is clear that our students remain hardworking, dedicated, competitive and embrace their mateship amongst peers. These attributes are the foundations for success and continue to drive the positive results of our sporting teams. Although not all teams and individuals were crowned champions, it has been admirable to observe the graciousness of our students in defeat also. Well done to all our College representatives for Term 3.

A reminder to all students that Term 4 College Basketball and Cricket trials are currently underway and that these sports will commence as of Week 1, Term 4. It is anticipated that students are correctly attired and permission notes are returned. Competition draws are available on the MCS website.

On Thursday 30th August the St Dominic’s College Athletics’ team travelled to Sydney Olympic Park Athletics’ Centre to compete in the MCS Athletics Championships. The team was determined to rival St Gregory’s College long stand as the Athletics Champions. Despite only one weeks turnaround from the College Carnival, the track and relay teams had participated in training sessions in the days leading up to the Championship. The College was represented by 55 students overall on the day. Significantly, each event on the program had a representative from St Dominic’s College; this is a testament to our students as most rivalling MCS Colleges find it difficult to achieve the same level of participation.

Across the course of the day, there were some outstanding individual results on both the track and the field. It is difficult to highlight standout performances. However, witnessing the dominance of the College 4 x100m relay teams was fantastic. Across seven age divisions, St Dominic’s placed 1st in five and 2nd in the remaining two. Not only were the results reason for affirmation, but the way in which team members stayed till the end to support each other was just as pleasing.

Congratulations to our Year 12 team members who put in a great performance in their last meet together. Thank you to the following boys on your contribution to the team across the last six years:

Thank you to Mr Ronchetti who assisted with training students in the lead up to the Championship. Thank you to Miss Day, Mr Kilbourne, Mr Mackinnon, Miss Cook and Mr Hall for their support in distributing team apparel, marshalling events and supervising and supporting students throughout the day. Overall, well done to each of our students who gave their best and supported their teammates at the Championships. Congratulations to the following students who received Age Champion and Runners Up honours for 2018.

The team combined well and built a game around solid communication in defence. We advanced through the pool stage undefeated with 9-0, 14-0, 6-0 and 16-0 victories. This put us into a semi final which we won 7-1.

Our grand final was against Winmalee High, who we had beaten in the pool game. We started strong and our defence held tight for a 7-0 victory.

The team looks forward to moving to all schools state cup and would like to thank Mr Zammit for managing on the day and to all the parent who came down in support throughout the day.

On Wednesday the Year 10/11 Rugby League team took part in the NSWCCC Cup at St.Mary’s. In their first game they played St.Patrick’s Sutherland. After a tightly contested first half, the team crossed for the first try and lead 6-0 with only a few minutes remaining. On the last set of six for the game, St.Patrick’s score a try and the game ended up a 6 all draw. The team were declared winners based on the first try scorers rule. In the team’s second game they played the undefeated Newman College from Port Macquarie. This was the team’s best performance of the day as they scored 2 unanswered tries to win 10-0 with their defence being the highlight. In the semi final the team played St.Clare’s College from Taree. The team dominated for the majority of the game and lead 6-0 with only 5 minutes to go. St.Clare’s finished the stronger however and scored two late tries to win 8-6 and knock the team out of the competition. Well done to the boys on a great day of footy played in the right spirit.

The Year 7 MCS Touch Football team successfully won the MCS Year 7 competition for 2018. Throughout the season, we managed to be undefeated in all our matches. The team scored 50 tries throughout the season and only conceded 6 tries against all opponents. The team work throughout the season was outstanding, with all players contributing to all aspects of the games. In our Semi Final we played against Parramatta Marist, who we meet during the regular rounds and won 4-1. It was a difficult start to the game with the score at 1-1 for most of the first half. With great determination, the boys fought back and won 6-1.

This meant we were playing Patrician Brothers Blacktown in the Grand Final. We had a 2-2 draw against them I the regular rounds and knew that it wouldn’t be an easy game. We had a great start, we were leading Blacktown 2-0 by half time. The defence of the team placed a lot of pressure on Blacktown and we won the Grand Final 3-0. Congratulations to all the players of the Year 7 MCS Touch Football Team for 2018. Thank you to Mr Rawding and Mr Mackinnon for coaching us and a special thanks to Tyler Stewart in Year 10 who helped at every match.

The Year 8 touch footy season was highly successful and full of energy. Their hard work and dedication throughout the season paid off, winning 9 of our 10 games and deservingly making the grand final. With some new players still learning the game, the more experienced players instantly took leadership within the group. The team was led by Liam Ison who on numerous occasions showed his leadership skills through his actions on the field. Unfortunately, the fairy tale grand final was not meant to be as Patrician Brothers Blacktown beat us through the middle of the field with electric pace and experience.

The team gelled instantly and with success early in the competition the playing group was full of confidence. Strong defence allowed our middle players to fire attack straight away. With lightning speed through the middle, Jett Clearly, Liam Ison and Liam Mahood were able to provide some great balls to the links and wingers who found the line countless times.

The grand final saw the boys matched up against the other clear dominant team throughout the season, Patrician Brothers Blacktown. Liam Ison managed to slip through the Blacktown defence early in the first half, giving St Dominic’s the 1-0 lead at half time. Unfortunately, it is a game of two halves, Blacktown started the second half with high intensity and managed to put two tries on St Dominic’s by the full-time siren.

The boys showed up every game ready to play and always displayed a high level of sportsmanship.  The team played all season with good spirit and always represented the College with pride. All players should be commended on their efforts and involvements for the 2018 season.

After winning our Semi-final, St Dominic’s U/14 AFL team travelled to Gipps Road Greystanes for the Grand-final against arch rivals Gregory Hills, Campbelltown.

The day was good for football – nice and sunny, cool and no wind! The boys were in good spirit for a good game. The first half was excellent as St Dominic’s matched everything Gregory Hills threw at them. Both teams marked well, and the free kicks were on target. The scores were close at half time. However, the game did not quite progress as we were hoping. Gregory Hills came out in the second half with all guns firing. They marked everything, and goals were on target much more than ours.

Thanks to Mr Kennedy-Gould for stepping into the breach as coach, you did a great job.

On Monday the 10th of September the Opens Basketball team competed in the NSW Schools Championships at Hills Basketball Stadium. This tournament sees the winner of the CCC State tournament compete against the number one team from CIS and the number 1 and 2 teams from Government Schools.

This year we lined up against Sydney Boys High School in the Semi Final, The same opponent we were able to beat in last years semi. Unfortunately this year we could not replicate the same result. Just before the tournament we lost regular starting players Blair Williams to the United States and Ryan Peterson to injury. Despite competing to the best of our ability, the opposition proved to be too strong on this occasion, running out 24 point winners.

A special mention to our graduating year 12 players who have represented the College for 6 years and have achieved at the highest level: Ryan Peterson, Laurence Bognot, Jacob Zalac and Samuel Pares.

Thank you to Mr Leon Hine for coaching throughout 2018 and MR Kilbourne for stepping into the role for this tournament. Thank you also to Mrs McCormick for managing at this years tournament.