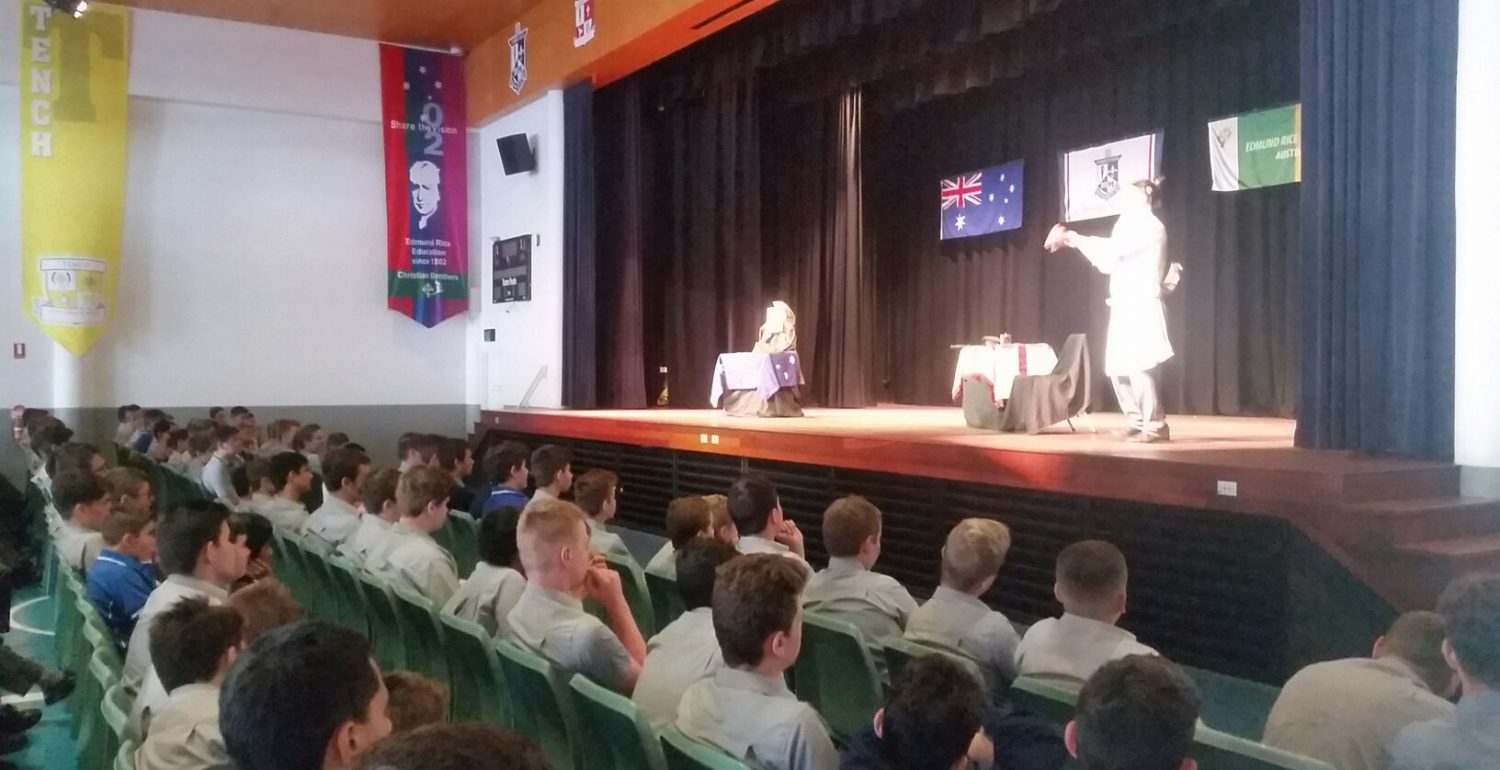 On the 8th of March 2019, Year 10 had the privilege to watch an amazing Incursion by Brett Hunt during period 3 relating to the Vietnam War study that we are studying in a History course in HSIE.

This was an incursion that I have never been to before and very different to other performances. It was where Brett Hunt, a performer would be on stage preforming an educative, dramatic and an unforgettable one man performance where he was acting to be many people involved in the Vietnam War. This was the war that took place in the late 1960’s to the early 1970’s. The twist was, that he was mainly acting his father as well as the people that fought in the war with Brett’s dad as he told us a story in a dramatic performance.

It all started when Brett acted to be his father, where his Dad was only 17 living with the typical Australian family in QLD, who at the time of the 1960’s was going through financial hard times. While acting his dad, Brett preformed where his dad wanted to join the armed forces to go and fight in Vietnam. We then followed Brett in his detailed performance where his dad would then go on convincing his parents finally making his way into the war. Only a few weeks before Brett’s dad was finishing his training at the age of 19 and leaving for war, he then found a beautiful woman which indeed turned out to be Brett’s mum.

Brett continued to act his father where his dad finally made his way onto the HMAS Sydney soon to arrive in Vietnam. While Brett was preforming this performance us audience members received a highly detailed demonstration which would picture in our head what the war was like, where his father walked through the jungle of Vietnam to make it through to a military base. Here, the solders would go to the local bars trying to have fun in the hard times. Music was incorporated to make it more realistic and amusing and Brett would act this in a dramatic way.

Jeopardy soon took place when the Vietcong’s would take the midshafts of the Australian/ U.S army and would then place them back into the military base that would then deploy and bomb the Australian solders. It was a sneaky plan used by the Vietcong’s. Brett, then was preforming he dad being injured in this situation and his dad would soon be taken back to Australia. Unfortunately, Bret’s dad’s close friend was injured during the explosion of the bomb. This friend saved Brett’s fathers life.

In Australia, Brett’s Dad would then see his mother while he was injured in a Melbourne hospital. His mother would catch a bus down to Melbourne just to see his father. When his father went back home in QLD and was then a family man, he was still affected by what that war had done to him- mentally. Even though Brett’s dad was in the way he was physically, his mother still wanted to marry him, and that happened.

The ending of the performance was amazing where Brett’s family would go down to Sydney in the 1987 march for the Vietnam War which occurred in Kings Cross. Expect, Brett’s Mum would not come at this time. During the concert in the Domain, Brett’s father would go on stage to be recognised for what he had done, and Brett and his siblings convinced an angry security guard to let them on stage. Here, they were in front of 1000’s of people singing “I was only 19” be Red Gum in harmony.

I am glad that I have the privilege to watch this informing performance. The hour performance is just too good to be true and it is hard to write down how great it was. Watching the performance will have amazed and yes, you will be watching everything Brett does.

Learning about what his father would go through was amazing, and would make me sad as young men, only a few years older than me went through this pain determined to fight the Vietcong’s. Having the family connection to Brett’s family made this performance true and very interesting to watch.

Thank you to Brett and thank you to the HSIE staff and Mr Rawding for making this possible.  The performance was a 10 out of 10 and was amazing to watch.

Congratulations to our Cricket Teams